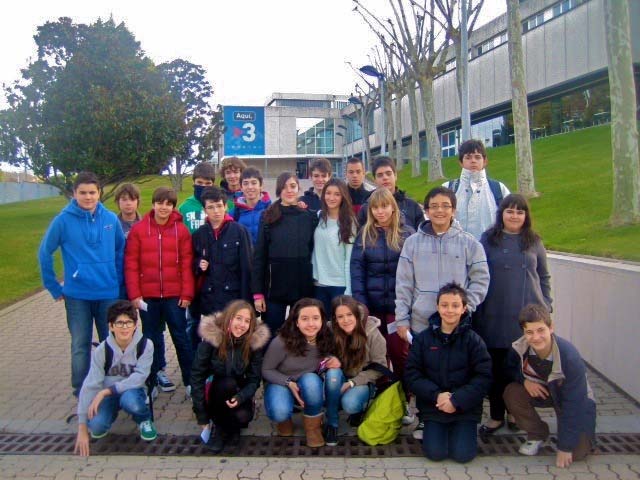 Last Monday the students of second year of ESO went on a most interesting trip to visit the facilities of TV3 and Catalunya Ràdio as part of this term’s work on audiovisual communication.

It all started outside the premises of TV3 in Sant Joan Despí on a freezing Monday morning after the coach had left us. We had to wait for a hostess who would guide us all about the building. Once inside, we all had to pass through a security control, as in the airports!

We saw the three main sets where most programmes are made, with the lot of cameras and cables—it all looked so much bigger than on tv!—, though there was no live or recording programme on at that moment, so we could not see what it was like to see an actor or famous presenter in full action, but we were determined to search for a celebrity anywhere around the place. Walking along the corridors, on our way to the make- up room, we saw some people, but we could not recognise anyone as being famous. In the make-up room they showed us the different  materials used to portray the most popular fictional characters of the channel like the ones of Club Súper Tres or Crackòvia. They even had some wigs made with real hair!

Afterwards we were shown an enormous warehouse where all the prop for the programmes are kept. There were also big pieces of sets. They explained to us that all the sets had wheels at the bottom to slide them easily from one place to another.

Then we made our way to the exit, because we had to go to see a live radio programme in Catalunya Ràdio, which is situated in Barcelona. Still no celebrities. Where must have they gone!

To go to Catalunya Ràdio we took the Tram, a public transport of Barcelona that most of us had never used before. We stopped almost in front of the building where the radio is located and got in just on time to see the live programme Els optimistes, a very funny quiz with live music with Manu Guix—at last a celebrity!— in the piano. We knew most of the answers, but we couldn’t say a word, because the contestants were right there in front of us.

We went back to school with the feeling that we had experienced the emotion of knowing the inside of a television and radio. The next time that we watch a tv programme, we will remember how different things actually are from what we see from our sofa.